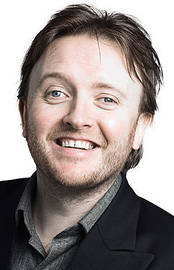 "Comedy Brilliance!" - Jasper Carrot
2005 Edinburgh Fringe debut with his one man show "As seen on TV"

After a harebrained idea that went just a bit too far Chris first gave stand-up a go in the summer of 2003. In the 12 months that followed he was not only voted Jongleurs best newcomer but also achieved a top three placing in another three premier national competitions including Channel Four's "So You Think You're Funny?". He's now playing some of the top clubs in London and around the country including Jongleurs and The Comedy Store, and with his services continuing to increase in demand.

Although registered blind, Chris chooses to talk only occasionally about his disability as he believes that the audience should be able to relate to as much of his material as possible. Instead his material spans from the real to the ridiculous - whether it be about university shenanigans or the all too depressing world of the giraffe and with the odd tale of embarrassment thrown in for good measure!

When can I see Chris McCausland?