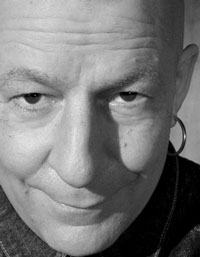 As seen in the movie...
MEAN MACHINE

One of the truly big stars to have at Outside The Box in more than ways than one. East Ender Jeff Innocent is that dangerous breed; a big man with a brain.

This unique contrast is the product of a colorful life growing up in London's East End, which has seen him combine working as a bouncer while also boasting an academic background. Such experiences form the cornerstone of his act and his talent has seen him land numerous roles on film and TV, including appearing alongside fellow hard-man turned thespian Vinny Jones in Mean Machine, Time Gentlemen and It Was An Accident as well as working with the likes of Later With Jools Holland and Phil Jupitus.

With an act that's part history lesson part sociology lecture but all funny, he has been described as "like Alan Bennett writing an episode of 'Minder".

"He commands the room, hits strong gags with confidence and style and has the audience bending to his every whim." - Chortle

When can I see Jeff Innocent?