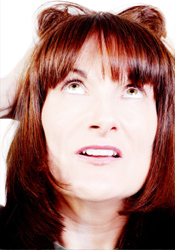 " The headliner by comparsion shines out like an emerald in a cowpat .A softly spoken irish women with an erudite wit and a veterans delivery . I hope the young competition entrants were chastened and inspired by seeing her ". - East anglian Daily Times

Mary Bourke was born in Dublin during a cross fire hurricane .She lives in leafy Buckinghamshire with her comedian husband and her large collection of Betty Page memorabilia .Before she became a comic She was a burlesque dancer and choreographer in San Francisco .She has published numerous romantic novels under the pseudonymnTara Sundrive .

As well as being an accomplished comedian who has performed all over the world Ms Bourke is also a respected comedy writer .She is most famous for having written "the joke that was heard around the world " ie "My name is Shazia Mirza at least that's what it says on my pilot's licence "

When can I see Mary Bourke?