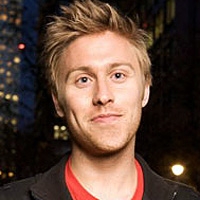 An instant hit with his innate ability to improvise on any subject, Russell makes the stage his own personal playground and thrives on spontaneous chats with his audience, leading them down a never-ending series of unstoppably comical journeys.

Star of The Comedy Zone at the 2003 Edinburgh Festival, Russell has twice toured as the special guest of Perrier Award Winner, Daniel Kitson. Fast making a name for himself as one of the exciting young guns of UK comedy, Russell returned to the Edinburgh festival in 2004 to perform his acclaimed debut solo show.

What the press said:

"Side-splitting, sure to be a future comedy star" - Bristol Evening Post

"Howard has a tiggerish restlessness, bounding around the stage perpetually in search of new angles for his seemingly limitless imagination" - Venue Magazine

When can I see Russell Howard?