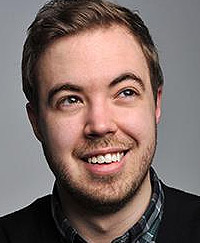 Promising newcomer Nick Dixon is steadily rising on the UK circuit, and is held in high regard by his contemporaries and industry officials alike. A natural comedian, he reached the final of The Leicester Square New Comedian of the Year after performing stand-up for only three months. Within a year, he was one of a select few (chosen from over 800 applicants) to perform in BBC Radio 2s prized New Comedy Awards. In 2012, truly cementing his status as a dynamic newcomer, Nick reached the final of the prestigious So You Think You're Funny? competition at the Edinburgh festival.

Nick has crafted a unique and distinctive style. He masterfully combines acerbic wit and intelligent, edgy writing with vulnerability and self-deprecation to winning effect. His sharp writing is complemented with scrupulously perfected timing and an assured delivery.

Following a stint on the Free Fringe in 2012, Nick returns to the Edinburgh festival this year, having earned a coveted slot in the esteemed AAA Late Show, performing at the Pleasance Courtyard.

He continues to hone his material, and go from strength to strength, steadily earning his stripes on the UK stand-up circuit. He performs regularly at The Comedy Store in both London and Manchester, having already won the infamous and brutal King Gong show back in May 2012. He is noted for his well-crafted, quality joke-writing and is proud to have had his work broadcast on BBC Radio 4 so early in his career.

"WELL WORTH LOOKING OUT FOR" - Jason Manford

"A SUPERB THINKER...HE NO DOUBT HAS A GREAT FUTURE IN COMEDY" - Adam Bloom

When can I see Nick Dixon?