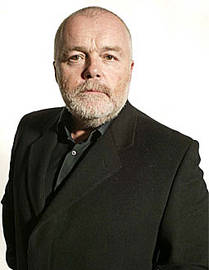 Kevin Mccarthy has been a comedian a long while, all his life infact. But only in the late eighties did he make it his career.

He started purely by accident, getting on stage as an open spot at the infamous "Tunnel Club" in South East London purely to win a dare. A truck driver at the time with his own business, comedy became a hobby until the trucking had to go and he became a full time comedian.

His career to date has covered the full gambit of the comedy world, indeed the world at large, working in such far flung places as South America, North America, the Caribbean, Europe, The Middle East, even Afghanistan. He has entertained all-comers. kids, troops, Hells Angels, audiences from 10 to 45,000.

He not only performs on but also writes for television, having been involved recently in writing "The Sketch Show", the BAFTA award winning ITV comedy, and has appeared on many television productions as a comedian, a comic actor, and indeed as a straight actor. His involvement with T.V. includes warm-up duties on such shows as "The Lottery" and "Later, with Jools Holland". He writes speeches for the management of such corporate giants as Coca Cola and provides corporate comedy work-shops for institutions such as them; even teaching prisoners in Winchester prison from novice to performer in organised courses in jail.

When can I see Kevin McCarthy?