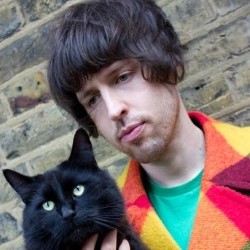 Comedian, writer, filmmaker and voice-over artist Tom Ward has made a name for himself in comedy as a finalist in the BBC Radio New Comedy Award 2014, Leicester Square New Comedian Final 2013 and NATY Final 2014. Tom has forged a successful and unique path in the industry, with his inventive style incorporating his voice-over talents and improvisation, in addition to his innovative writing.

Equal parts hilarious and bizarreOne of the most impressive, distinctive newish acts around (Bruce Dessau  Beyond The Joke)

Unique, unpredictable, and able to carry off jokes about the oddest of thingsDefinitely someone to look out for. (London is Funny)

During the past year, Toms provided tour support for Hal Cruttenden and Gary Delaney. He also appeared on Live At The Comedy Store (Comedy Central) and has recently filmed for Live At The BBC (BBC World Wide). In August 2016, Tom performed his debut hour at the Edinburgh Festival, showcasing his fantastic routines about his evangelical parents and his experiences as a manager of a charity shop. Time Out London singled him out as one to watch at the Fringe.

When can I see Tom Ward?