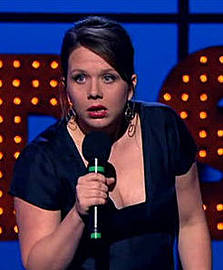 In 2003 she made quite an impact in The Babycham Funny Women Stand-up competition, for which she received a special mention. She also won second place in The Hackney Empire New Act Final in 2004.

"This cocky Londoner, and up-and-coming actress, knows how to hold an audience's attention, with a well-honed delivery that ensures her material always gets the best response." CHORTLE

When can I see Kerry Godliman?