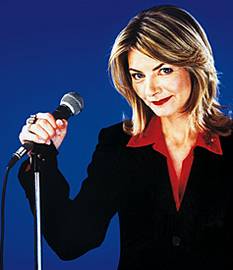 Thank God, for Jo Caulfield an inspiration to would-be female comics  The Observer

New Year's resolution for the BBC: give this woman her own show  The Guardian

Cut-throat wit and a razor-sharp tongue, like Baby Jane on speed. Undoubtedly the rising star of women's comedy  The Evening Standard

JO CAULFIELD: THE HARD SELL
Jo Caulfield is one of the finest female comics at work (The Observer) and has recently been nominated as the best female Stand-Up in the country (Chortle.co.uk). She is also Graham Nortons head writer. She is, quite simply, a damn funny woman (The Scotsman).

Jo Caulfield has been a Comedy Writer / Programme Consultant on all five series of the BAFTA Award-winning So Graham Norton. She was head-writer on both Zoe Ball's Strictly Dance Fever (BBC3) and Ruby Waxs Waiting Game (BBC1). Jo has also written for Anne Robinson, Marcus Brigstocke and Ant & Dec among others.

For the last 5 years Jo has taken her solo Stand-Up show to the Edinburgh Festival to annual critical acclaim. Due to public demand she has moved to a bigger venue each year and has become one of a rare group in Edinburgh  a comedian who is a guaranteed sell-out.

Jo is also a highly sought after TV warm-up artist. Shows she works on include: Have I Got News For You, Room 101, Alistair McGowans Big Impression, Bremner, Bird and Fortune, Two Pints of Lager and a Packet of Crisps and So Graham Norton.

When can I see Jo Caulfield?