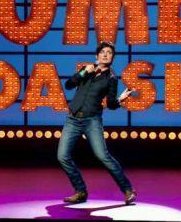 2008 DAVE Best Joke at The Fringe Award Mangled Mantra of the Messed Up Modern Mind
2007 If.Comeddie Best Newcomer Nominee Fight or Flight
2004 Winner of the Funny Women Award Funny Women
2004 'So You Think You're Funny' Finalist

Bursting onto the comedy circuit in 2004, Zoe won the prestigious Funny Women competition and reached the final of Channel 4's 'So You Think You're Funny' in the same year, and has since established herself as one of the country's leading comic talents.

In 2007, she was nominated for the If.Comeddie Best Newcomer award for her debut solo show 'Fight or Flight', and is in constant demand on the UK and international comedy scene. Zoe also runs her own night 'Bent Double' in Brighton, voted number 1 Critic's Choice by The Times, and a regular night in London at the Royal Vauxhall Tavern which she comperes and produces.

A regular contributor to various radio shows on Radio 4 and LBC, Zoe was also invited to become a patron of Pride in 2007, joining a select elite including Stephen Fry and Sir Ian McKellen.

"Genuinely funny, her comic timing is excellent and her jokes intelligent and insightful" - Edinburgh Fest Mag

"Zoe is the epitome of camp comedy, her audience interaction is the best I have seen" - Scotsgay

When can I see Zoe Lyons?