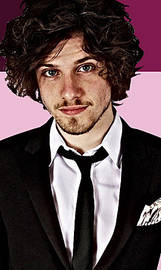 Alfie Brown delivers an intelligent and thought-provoking set always guaranteed to offer something different to the norm. He has a caustic wit which has delighted audiences and critics across the country.

Having recently performed at the Edinburgh Fringe starring in The Lunchtime Club, Best of the Five Pound Fringe and playing 'The Guru' in Mark Watson's The Hotel Alfie is now rising up through the ranks of the UK comedy circuit, playing for Komedia, CKP, Off The Kerb. Alfie is the regular host of the Alternative Folk night at Ronnie Scotts in Soho and for several other music nights around London including at The Proud Galleries and The Troubadour. He also appeared at Bestival 2009.

When can I see Alfie Brown?