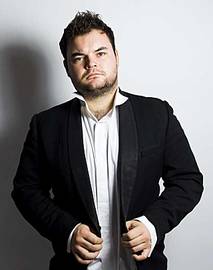 Since starting comedy in 2009, Lloyd has quickly established himself as one of the most natural, brightest and original comedians on the circuit, and in 2011 was selected to perform as part of the prestigious Edinburgh package show, Big Value Comedy Showcase and in 2012 performed as part of the AAA Late Stand Up Showcase in The Pleasance at the Edinburgh Festival.

Aside from comedy, Lloyd is also a professional choral singer and can be heard performing with the choirs of Westminster Abbey, St George's Chapel - Windsor Castle and various other London groups.

"the next big thing" FHM

When can I see Lloyd Griffith?