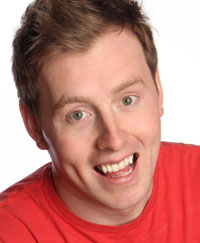 Irishman Andrew Ryan made his comedy circuit debut in 2008 when he spontaneously entered an open mic contest. Fast forward to 2013 and he is now one of the most exciting talents in recent years; in demand as an act and an MC at the biggest comedy clubs across Ireland and the UK.
Andrews quintessentially Irish storytelling abilities and cheeky, friendly demeanour make him a natural observational stand up. He has supported both Justin Moorhouse and Terry Alderton on their UK tours and performed his debut hour show Ryanopoly at the Edinburgh Fringe Festival in 2012, receiving rave reviews

Illuminating debut ????  The Metro.
In 2014, Andrew plans to return to the Edinburgh Fringe with his follow up show "Life of Ryan".

He has performed stand-up on BBC3s Russell Howards Good News. He has appeared as a guest on Sky Sunrise and as a regular panelist on BBC Radio.

When can I see Andrew Ryan?