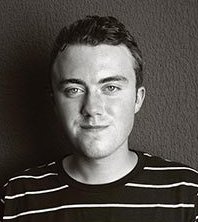 Still only 20 years old, Tom Lucy is one of the youngest professional comedians in the world. Having already established himself on the UK comedy circuit at clubs such as The Comedy Store, The Glee Club and Komedia, Lucy has had a remarkable impact on the scene since his first gig at the tender age of 16.

As well as performing all over the UK, Lucy has toured internationally in Ireland, Switzerland, Germany and a stint at the world famous Comedy Cellar in New York, USA.

In 2015, at the age of 18, Lucy became the youngest ever comedian to be signed to Off The Kerb  the UKs biggest comedy agency. He went on to win the prestigious Leicester Mercury Comedian of the Year award in 2016 at just 19 and 2017 sees him supporting Jack Whitehall on his UK & Ireland tour.

Too young, too good John Bishop

Outstanding young comic and one to watch. Headed for great things! Harry Hill

Easy to see what the fuss is about Bruce Dessau, Beyond The Joke

When can I see Tom Lucy?