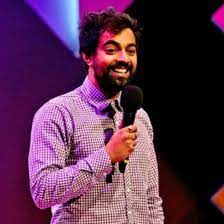 Raul Kohli has fast become one of the most captivating acts on the circuit. As one of the few Asians to have grown up in the far north of England (Newcastle Upon Tyne), hes been blessed with a Worldview that upends ethnicity, culture and class. Combining Superb political comedy (The Scotsman) with surreal storytelling, Raul Kohli has is a name in Comedy. His most recent solo show: All My Heroes Are Dead, in Jail or Touched Up Your Nan was nominated for Best Show at the Leicester Comedy Festival 2019 & is about to be released as an album in association with Comedy Dynamics. As well as several radio & TV appearances (Incl: BBC Radio 4, BBC Comedy Underground, RTV Netherlands & more), he currently has his own podcast on BBC SOUNDS: Comic Sanskrit

Raul is an award-winning comedian (NATYS 2017) and appears regularly at some of the biggest comedy clubs around the World (The Stand Edinburgh, Laugh Canvas India, Comedyhuis Netherlands).

A powerful, passionate, open-minded, intelligent voice. It is superb political comedy and commentary  The Scotsman

When can I see Raul Kohli?