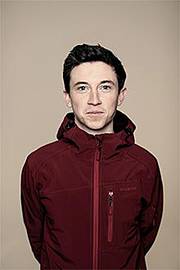 Hello, here is a mini comedy autobiography should it be of any interest to you at all...

I started performing stand-up comedy in 2013 after gaining a following on Twitter under the pseudonym @LittleLostLad. People seemed to like my jokes on Twitter, so I thought they might like them even better if they got to hear my voice too. This is still up for debate.

Six months after starting out I made it to the Semi-final of The BBC New Comedy Award, which allowed me to perform on both BBC Radio 4 and BBC Radio 2, which helped justify what I was doing to my parents and make my elderly neighbours both excited and slightly confused.

As time went on I started getting more gigs and some people even decided to start giving me money for my services (comedy) and so I thought I should carry on going. This too is up for debate.


In December 2014, 18 months after I started telling jokes on stage I was nominated for the Leicester Mercury New Comedian of The Year which was incredibly flattering and allowed me to follow in the footsteps of some of my favourite UK comedians.

In June 2015 I was also nominated for the Magners New Comedian of the Year.

In July 2015 I made it to the final of the English Comedian of the Year.

I didn't win a single one of these competitions, but with there being more losers than winners the chances are the losers will go on to do better than the winners, but that's just the law of averages I guess/think.

And so, with a little experience behind me, some jokes in my back pocket and the ability to stand on a stage and hold a microphone close to my mouth and talk into it, I am now working hard to make it all worth it.

If you want to join me on my journey just check out my gig page here and come and say hello.

When can I see Jake Lambert?