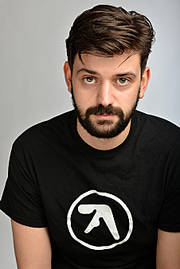 Fin Taylor began performing stand-up whilst at Bristol University in January 2009. Since then he has established himself as a unique voice in the up-and-coming generation of new UK comics. He soon became professional and went on to tour support for Glenn Wool and Russell Howard, as well as regularly warming up for BBC ONEs Pointless hosted by Alexander Armstrong.

His debut solo show at the Edinburgh Festival in 2014 was met with 4 star reviews and full houses throughout the month, with Fest magazine naming him as the stand-up to catch in their first issue (page 16).

In October, Taylor recorded a streamlined version of the show as a comedy album, Fin Taylor: Live From the Wardrobe at a sold out Wardrobe Theatre in Bristol. The album is free to download and has also been uploaded onto YouTube in full. 2 Tours of Europe followed, through Switzerland and then headlining through Latvia and Estonia. He has acted in both BBC and Channel 4 online comedy shorts, and made multiple appearances on the Josh Widdicombe XFM show.

Taylor will be debuting a new hour at the Machynlleth Comedy Festival in May, before taking it to the 2015 Edinburgh Festival.

When can I see Fin Taylor?