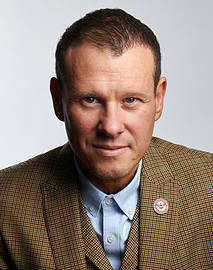 Maff Brown began performing stand-up comedy in November 2005. He is the founder and resident MC for Outside the Box, and is responsible for bringing comedians such as Jimmy Carr, Lenny Henry and Robin Williams to the club.

Maff also tours with his own material and has had success everywhere across Britain and as far as America.

He has done TV warm up for ITV, BBC and SKY and has written on BBC shows 'Mock The Week' & 'Shooting Stars'

'I think Maff Brown is very funny, but if you don't agree you can still laugh at his stupid hair' - Stephen Merchant

'The love child of Leo Sayer and a performing seal.' -Jack Dee

When can I see Maff Brown?