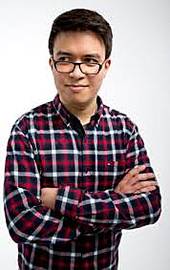 AS SEEN ON HAVE I GOT NEWS FOR YOU!

In 2010 I won the Chortle Student Comedian of the Year Award, and in 2011 I won Comedy Centrals Funniest Student Award.

Im not entirely sure where Ive put them, but there are photographs and testimonies available to support both claims I swear.

So if you feel like you recognise me from somewhere, it might be from one of those TV programs.

Or maybe we went to school together.

When can I see Phil Wang?